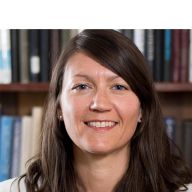 Title: A Systems Biology Approach to Identifying Modifiers of Bleeding in Hemophilia

Abstract: Blood clot formation is a complex and nonlinear process that occurs under flow and on multiple spatial and temporal scales. Defects and perturbations in the clotting system can result in serious bleeding or pathological clot formation, but due its complexity, the responses and their underlying mechanisms are challenging to predict. Mechanistic mathematical models of blood clot formation and coagulation can elucidate biochemical and biophysical mechanisms, help interpret experimental data, and guide experimental design. In this talk I will briefly describe one such model and show how an integrated mathematical and experimental approach has facilitated discovery of previously unrecognized interactions within the clotting system. I will first highlight results from a recent study focused on hemophilia A, a genetic bleeding disorder defined by the deficiency of proteins (clotting factors) necessary to form stable blood clots. Our study was motivated by the clinically observed variability in bleeding frequency and severity in hemophilia A, where clotting factor levels alone are poor predictors of bleeding risk. Our goal was to use the model to answer the question: in cases of hemophilia A with severe deficiency but mild bleeding, what might be compensating for the deficient clotting factor? We performed uncertainty and sensitivity analysis on our model to identify modifiers that enhance the clotting response in the context of hemophilia A. We identified coagulation factor V as a key modifier and confirmed this finding with experimental assays. The mathematical model was used further to propose one potential biochemical mechanism for these observations. I will also discuss our current work focused on extending the model to investigate other potential mechanisms and using similar techniques to identify modifiers of clotting in hemophilia B and C.